While doing some devotions the other morning I was struck with the incredible awareness that living for God takes courage – an immense and insurmountable degree of courage.

We read about Joshua, and Moses, and Daniel, and Paul, and Elijah in the Bible, and easily and instantly picture them as great hero’s, brave soldiers, fearless leaders. It’s not all that easy to picture them like you and me – normal, everyday human beings – because we read the edited version of their lives and not the whole story.

It’s like a movie that displays a person’s one-time season of glory: in war, in athletics, in business, in culture, in politics. But hey, if our lives were recorded in similar pattern, we might just look a lot more courageous to ourselves and to other people.

Everyday courage doesn’t make for a blockbuster hit or a Wall Street bestseller, but it is indeed the most important kind of courage. Without everyday steps there would never be big moments to celebrate or glorify.

With that said, I pass the rest of today’s devotional off to my sister, Esther. She sent me an email last month to encourage me. And that it did. I asked her if I could share it with all of you.

It takes courage to stand up to those who don’t believe – the people who think faith is a crazy (irrational) whim filled with idealism and false hope.

It takes courage to stand up to a growing body of evidence that suggests science is correct and faith is merely wishful thinking. I mean, who are we to believe that science might have it wrong? Right? Add to that the courage it takes to stand up to believers who sometimes think that what The Lord is asking is unnecessary, extraordinary, or just plain ridiculous.

It takes courage to live by faith and not by sight (just as His Word prescribes, but so many of us can’t comprehend).

It takes courage to believe that we are living sacrifices being built into an offering that is acceptable to Him… because sometimes the sacrifices He asks of us are really hard – like actually stepping out to invite the neighbors for dinner. Ugh!

So good, right? Thanks Es!

I leave you now with a passage of scripture that God gave Joshua. And why did Joshua need the reminder?… because dear people, Joshua was no different than you or I. He too needed to wake up each morning and be reminded that strength and courage to face each day is found in Christ alone. 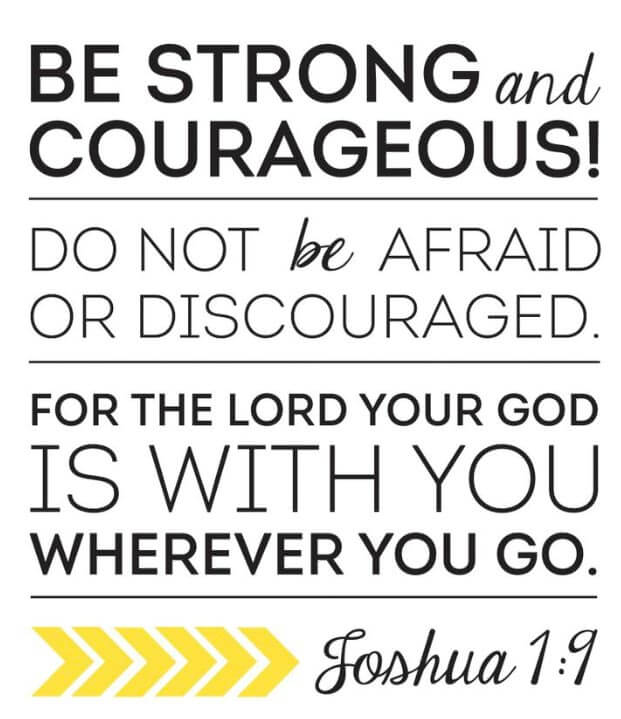