U2 And The Power Of Commitment

Chris and I were supposed to go to the U2 concert when it was scheduled for Edmonton in 2010. Sadly for Bono (and ticket buyers), Bono had to suddenly undergo back surgery resulting in the cancellation of the last few remaining stops on their tour – Edmonton being one of them. And while they did follow through on their promise to resume the tour once Bono was ‘back’ in the game, the timing failed to align with my 89-week pregnant state – resulting in a very saddened disapproval of our ‘standing only’ floor tickets. Thus, I was unable to attend (cue the sad music). But I must admit, I had a good laugh observing my 6’6 husband act like a kid on Christmas morning.

So here is the: ‘day in the life of Chris Glubish as he headed off to a U2 concert’

Date: June 1, 2011
Venue: Commonwealth Stadium, Edmonton, AB.
Event: U2 concert of all U2 concerts (according to Chris)

6am – Wakes to his alarm that is programmed to play “Beautiful Day”
7am – Sits down at his computer to surf the net to read reviews about the concert and discover interesting facts about the tour (like how much the video projector costs, how many people are employed on this tour and how many days it takes to set up the stage – what a nerd).
9am – Tells wife he found a guy on twitter who has been to every show on this tour and then tweets about it to let all U2 fans know the status of the ‘floor seats’ lineup. And according to this guy, who is sitting in spot #1 in line, there are 50 people currently camped out.
9:30am – Goes into a deep discussion with wife about how for the first time, he can truly understand the validity of twitter.
9:45am – Expresses to his wife his love for the ‘twitter guy’ as he announces there are now 200 people in line.
10:30am – Does some quick math to figure out that in order for him and his cousin, Ryan (who has now claimed the wife’s coveted ticket) to make the inner circle of 1500 people capacity, they would have to be standing in line no later than 2pm.
11am – Twitter check. Line has increased by 50 more people.
11:30am – Showers, eats and contacts Ryan about the status of the twitter guy.
12:30pm – Picks up Ryan.
1pm – Arrives at the line and are greeted by a self-policing fan who has taken it upon himself to provide order to the line-up chaos, who then proceeds to write #’s 466 & 467 on the back of their hands so as to stake their ‘proper’ claim in line (funny how legit a jiffy marker can be in situations like that).
2pm – Line reach’s 1500 people and Chris takes pictures to show wife how fun even the line was. Jerk.
2:30pm – Make’s buddies with the guy behind them so they can go buy some food.
2:31pm – Guy behind them negotiates that he will save their spot, no prob, if they bring him back a Twix bar.
2:32pm – Negotiation is sealed in jiffy marker.
3pm – McDonalds for lunch.
4:30pm – Line moves, and people get shoved into pen-style line-ups, resembling that of cow herding.
5:15pm – Doors open and people make a mad sprint to sake their claim in the inner circle.
5:20pm – Due to their long legs, Chris and Ry pass at least half the crowd and claim positions inside the inner ramp.
7pm – The opening act “The Fray” take to the stage.
7:45pm – Set change.
8pm – Washroom break.
9:15pm – U2 hits the stage, crowd goes WILD!!!!!
11:30pm– Concert ends
12:15am – Finally get out of Commonwealth (there’s a price to pay for being the first ones in).
12:30am – Find car that’s parked 10 blocks away
1am – Drops off Ryan
1:20am – Home
1:30am – Posts pictures and videos to Facebook
1:45am – Heads to bed
1:46am – Snoring commences
June 2 – Talks alllllllllllllllllllllllllllllllllllllllll day about how awesome the concert was, but is sad the wife had to miss it (smart husband to insert such a perfectly timed comment).

I remember listening to Chris talk about the concert while not being surprised by anything he said.

U2 are indeed amazing. I didn’t hesitate once to think Chris would describe them as anything less than phenomenal.

What fascinated me was when he was telling me about the twitter guy, and how often Chris checked the status of the line so he could be in the know.

What fascinated me was when he told me about the guy, who at 50 retired from owning his own business and now travels around the world going to U2 concerts. Like, seriously? People DO that?

What fascinated me was when he told me about a women he met on the floor who looked about my mom’s age (52) and when the concert started, pulled out a killer pair of boots that brought her up to Chris’s height so she too could see the band from a taller perspective – she didn’t want to miss a thing. Where do you even FIND boots like that?

There are so many Chris’s in this world, scattered in so many cities, throughout so many countries, from all walks, stages and ages in life, that it blows my mind to think about the impact U2 is making. What fascinated me then, and still fascinates me now, is the great lengths people are willing to go to (my hubby included) all because they love the music; because they are dedicated to U2; because they are true-blue die-hard fans.

It’s one thing to verbalize you love something, but your actions will be the thing that SHOWS your love. That’s commitment. 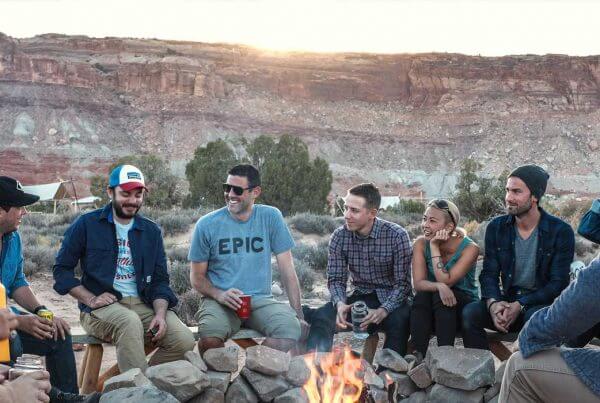